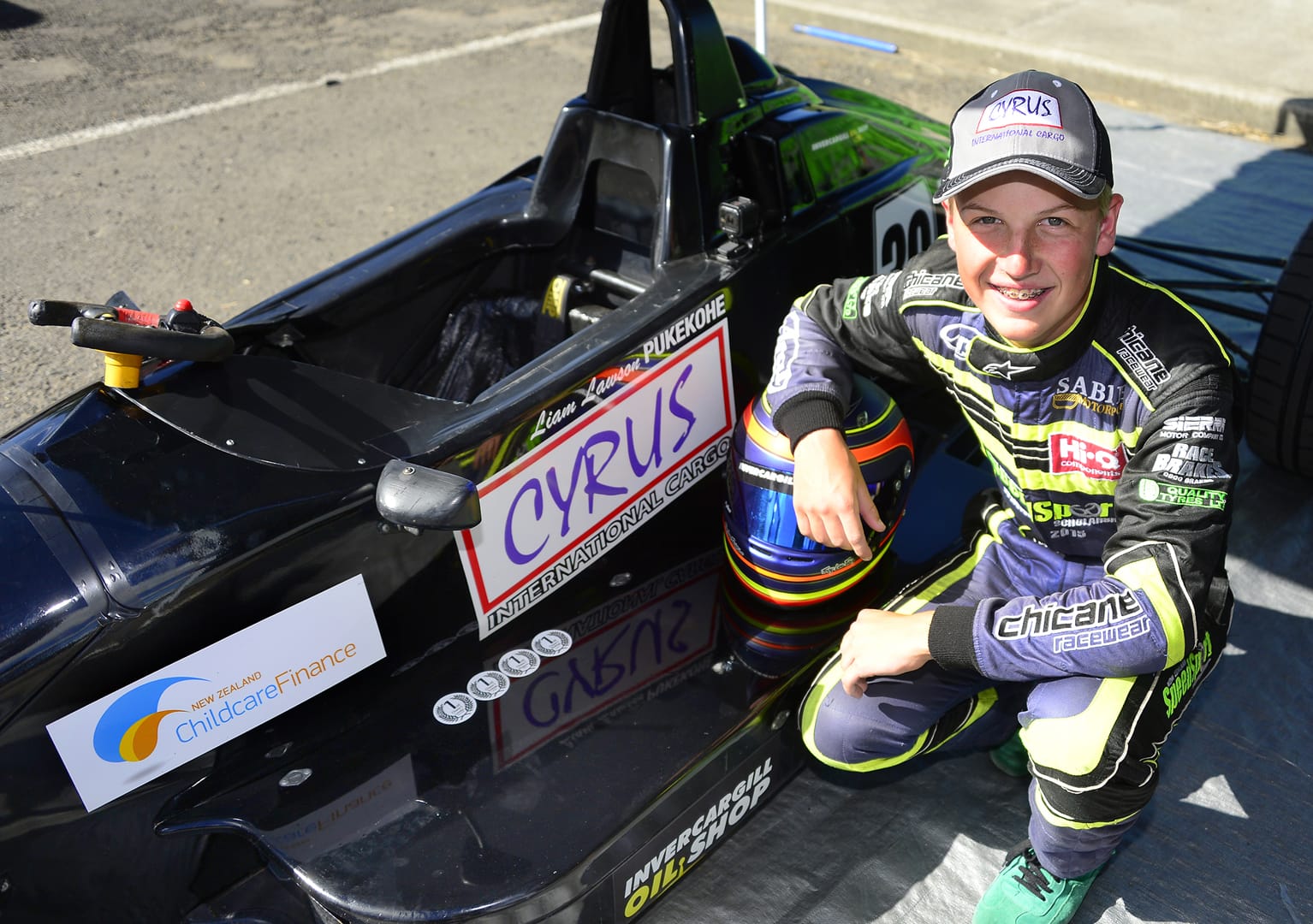 What a day Saturday, February 11 turned out to be for young Pukekohe single-seater driver Liam Lawson.

Not only did he win the New Zealand F1600 Championship on his 15th birthday, making him globally the youngest ever Formula Ford champion, he also won an opportunity to attend a young driver ‘shoot-out’ in America with a $US200,000 prize package.

Lawson dominated the NZ F1600 season, winning pole at every round and taking victory in 14 of the 15 championship races. He finished second in the other.

His car racing career began by winning the 2015 SpeedSport Scholarship and finishing Rookie of the Year in the NZ Formula First championship. Then the move late last year to Formula Ford was only possible after Liam was made an offer to drive the current championship winning car.

“None of this would have been possible if Carl from Cyrus International Cargo hadn’t provided me with a car. We set our sights on trying to win this championship, but it’s gone way better than we ever expected.”

Lawson had never raced at any of the three South Island circuits prior to the season but this proved no disadvantage after going fastest on every race track, right from the first practice session.

He dominated in every condition, wet or dry, over the five-round series. But it was his wet weather driving that caught the most attention. In a race held in torrential rain at Invercargill’s Teretonga Raceway, Liam’s victory was over 24-seconds after a brilliant display of driving.

But the best racing of the season came at the final round. Lawson won all three races but only after lead-swopping, race long battles with Christchurch driver, Michael Collins that had the crowd at the New Zealand Grand Prix meeting on their feet.

“Michael’s such a good driver, you know you can trust him, that he won’t push you off the track.”

While Liam’s achievements on the track have been dominant, it is even more remarkable that a completely novice team ran him.

“Our race team is my dad, my 16-year-old friend Jordie [Peters] from Marton, and me. Dad’s never run a race car before, although he always prepared and ran my karts in racing.”

“I know my way ’round a kart, but a Formula Ford is a completely new experience for all of us,” said Liam’s dad, Jared.

As the team headed through the South Island rounds at the start the season, some local support helped keep them on track.

“Meeting John Keast in Invercargill made a big difference to our racing. Suddenly we had someone who actually knew what they were doing!” quipped Jared.

Keast, well known in motorsport circles, assisted them through the southern rounds.

New Zealand motorsport legend Ken Smith has also provided valuable guidance to the young champion, and even gave Liam one of his helmets to use at the final two meetings.

“My helmet had got really tight, making it too hard to breath. So Kenny offered me one of his helmets. It’s fits perfectly! It was a great honour to be racing in Kenny’s colours, especially when winning the championship and to have him there at the track,” said Liam.

After winning the NZ F1600 title Lawson was presented with his ‘entry ticket’ to attend a young driver contest in America. The winner receives a $US200,000 supported drive in the Cooper Tires USF2000 Championship Powered by Mazda in 2018. The ‘shoot-out’ is held in December.

The team will ow set about fund-raising for the next adventure. Meanwhile, both Liam and Jordie are back at high school.