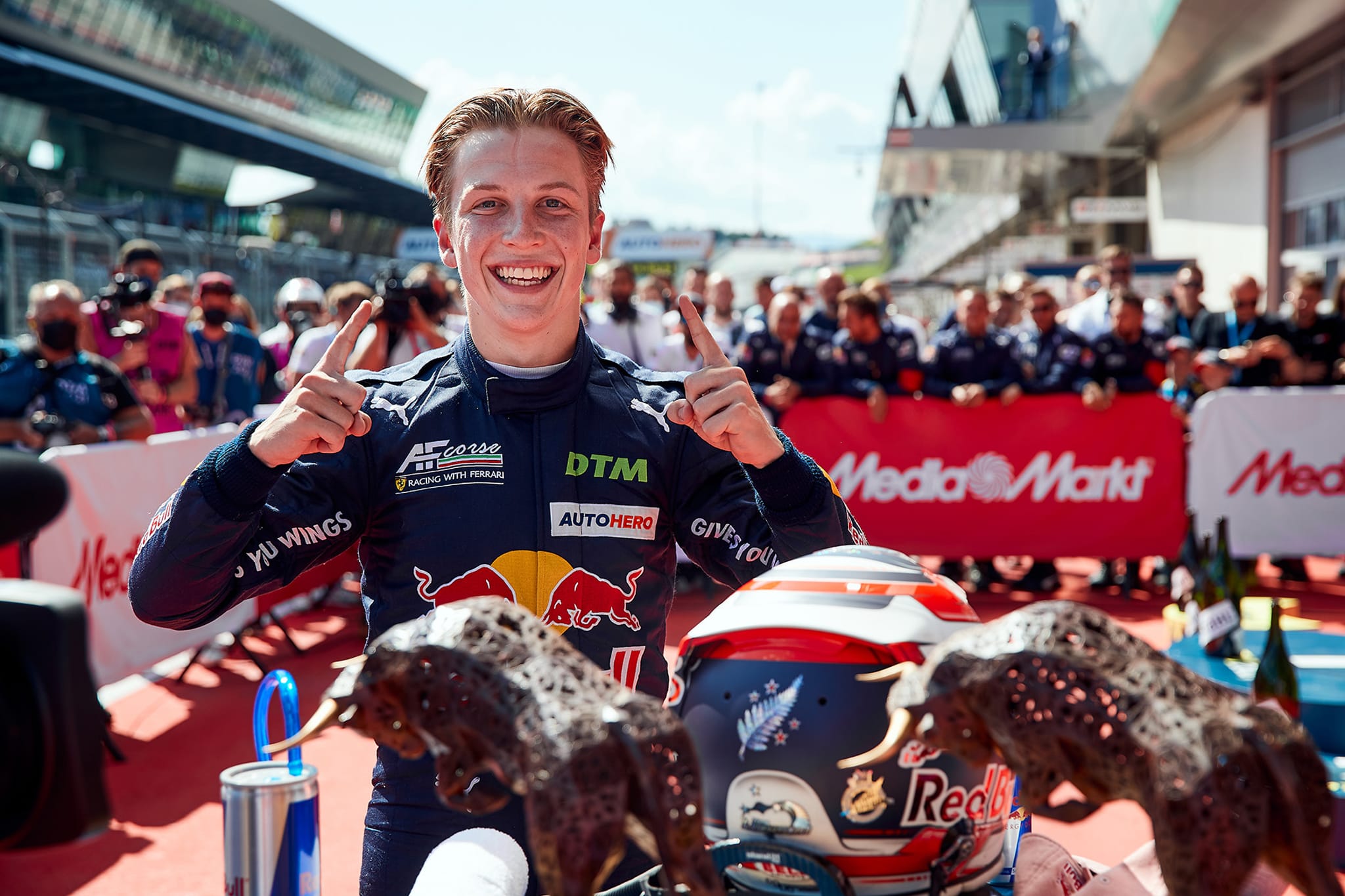 Double victory for Lawson at the Red Bull Ring

By Michael PriceSeptember 6, 2021No Comments

After winning on debut in the DTM Championship, young New Zealand star Liam Lawson has now become the first driver ever to win both races in a weekend.

A near perfect point-scoring weekend at the Red Bull Ring in Austria has also moved Lawson back into second place in the championship with six races to go.

The 19-year-old Red Bull Junior driver set a blistering pole time in his Ferrari 488 GT3 Evo before winning the opening 55-minute race. He then won the second race of the weekend from the front row of the grid, taking over the lead after the compulsory pitstop.

Qualifying P2 for the Sunday race, Lawson shadowed the BMW of Marco Wittman over the opening six laps until a super-quick pitstop by his AF Corse team put him into the lead of the race.

The former double DTM champion then hounded Lawson for 33 laps but he couldn’t find a way by. They crossed the finish line 0.15-seconds apart.

“Oh my god that was close,” said Lawson on his team radio after he greeted the flag. “I was maxed out, absolutely maxed out.”

And by starting off P2 for the second race after missing pole by the slimmest of margins, Lawson missed the extra point awarded for pole and fell that single point short of the maximum points score available for a weekend.

In both races Lawson had to put up a strong defence to keep a driver behind him, the task made even more difficult in Sunday’s race when his Ferrari carried an additional 25kgs of ballast for winning the first race.

“We hope to get something like this, but to get both victories in the weekend is very difficult, particularly with the added weight,” he said.

The top three placegetters in each race carry success ballast for the following race.

“Our team absolutely nailed the pitstop today when they had to, and this is what made the race,” added Lawson.

In the Saturday race, Lawson led away from pole and dominated most of the 39 laps but he struggled on worn tyres over the closing stages however still managed to keep a hard charging Maximillian Gotz (Mercedes) behind him.

Lawon’s first win came at Monza, near the home of his Italian based AF Corse team, and now he’s won an historic double at the race track owned by the global energy drink company.

“Being in the Red Bull car around this place is pretty epic and the support of the fans is awesome.”

The 55 points he did pick up at the Red Bull Ring has moved him back into second place in the championship, just 12 points behind Kelvin van der Linde (Audi) and 4 points clear of Mercedes driver Maximillian Gotz.

After a non-points scoring weekend at the previous round in Germany, Lawson had fallen from 2nd to 5th in the standings.

The DTM Championship resumes in a fortnight with two races at Assen in The Netherlands. 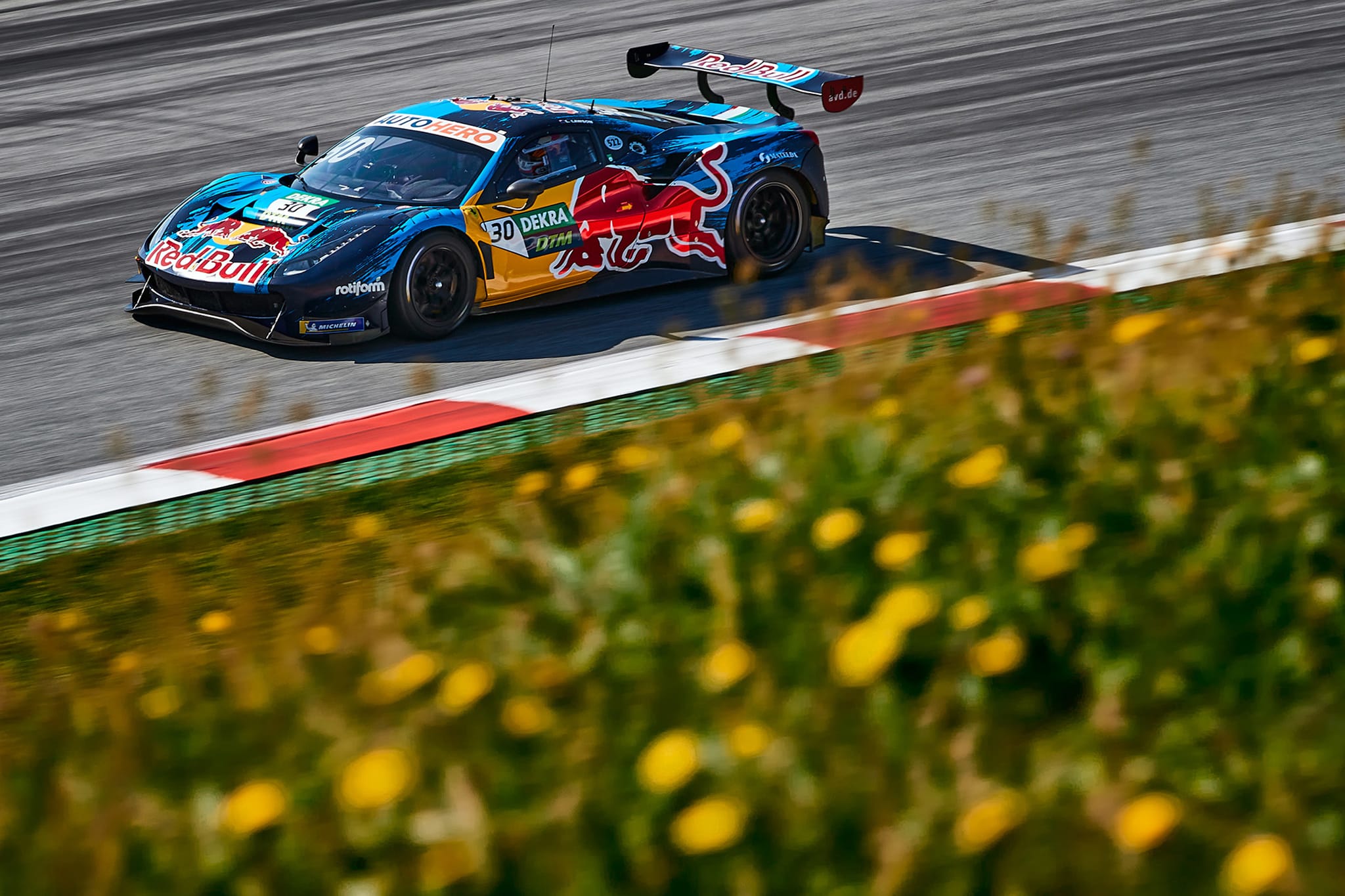